Confused where, and which region?, to trek in Nepal! Rugged Trails Nepal picked the Top 10 best treks in Nepal which are trekkers and our guide's favorite treks. Every day, every week, every month, and every year Nepal attracts more than a million trekkers and tourists. Beautiful Himalayan country Nepal is recommended by Lonely Planet, Trip Advisor, Forbes magazine, and many other travel books, and blogs as somewhere everyone needs to travel to in their lifetime!

Most people just come to see Mt. Everest or to Explore The Worlds Best Trekking Route on the Annapurna Circuit. However, Nepal is full of endless trekking routes, some even in the same regions but on lesser-known routes. These days there are hundreds of trekking agencies or freelance guides in Nepal and most agencies will suggest  Everest base camp and Annapurna Base Camp. There are many other trekking routes in Nepal that are more beautiful with the scenery, cultures, heritages, and some are historic places. We are making it easier to pick the best for you.

What are the best treks in Nepal?

The following top 10 listed treks are the best treks but among them, Everest Base Camp Trek is always on the top list for spectacular world's highest mountain view and Sherpa culture.

Considered to be one of the most breathtaking and magical places on Earth, the Mt. Everest Base Camp trek continues to be a must-see destination for people from all over the world. Rugged Trails Nepal will guide your journey to see Mt. Everest, the highest point on our planet; an experience of a lifetime. Highlights of this trek include the popular Namche Bazaar. Mostly used for altitude acclimatization, this is also a getaway to most of the treks to Base Camp and other mountain expeditions in this area. 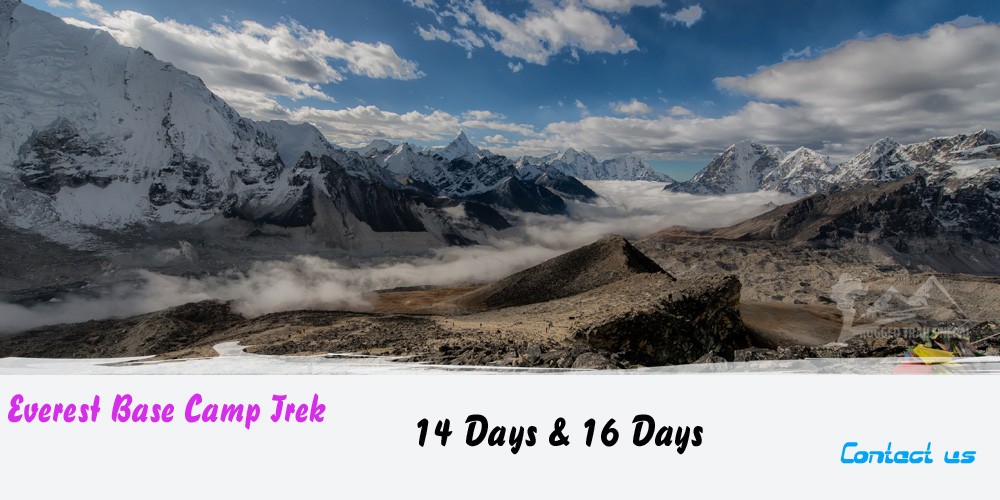 Everest 3 High passes trek is one of the most challenging and strenuous treks in the Everest region. During the high passes trek, you will climb some of the highest and most scenic passes in the region including Renjo La pass (5338m), Cho La pass (5368m), and Kongma La Pass (5545m). Other highlights include Gokyo Ri (5357m), Fifth Lake, Kalapattar (5643m), and Everest Base Camp (5500m). Because this trek is strenuous, for your own comfort you should be physically fit and previous experience of trekking/hiking.

Note: Gokyo Cho La Pass Everest Base Camp trek can be the optional trip plan if you don't have enough time or want to skip the hardest passes Renjo La and Kong Ma La. 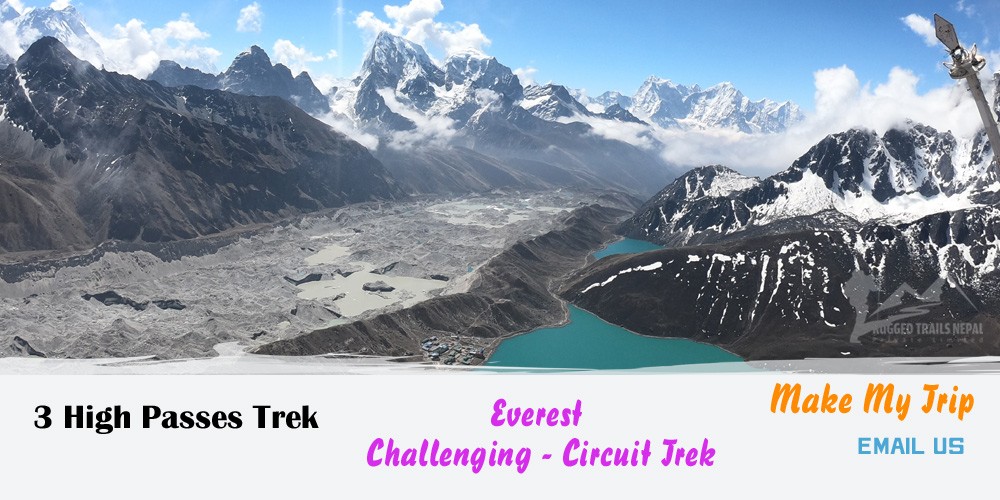 The Annapurna Circuit Trekking is known as one of the best longest passes trekking trails in the world and offers an incredible experience to hikers. This trek shares all that Nepal has to offer, which many Annapurna circuit trek start from the Besisahar, but nowadays because of the roadways, trekkers drive direct to Chamje or syange. Heading through the rugged trail, it reaches Manang village. It is highly influenced by Tibetan Buddhism. The climb over Thorong La Pass reaches an elevation of 17,769 ft and is a challenging yet beautiful highlight of the trip.

Note Annapurna Mini circuit or it's called Annapurna Panoramic trek can be the optional trip plan to skip the roads below Jomsom. Another recently developed Annapurna 7 High Passes Trek can be a great choice for the week-long trek. 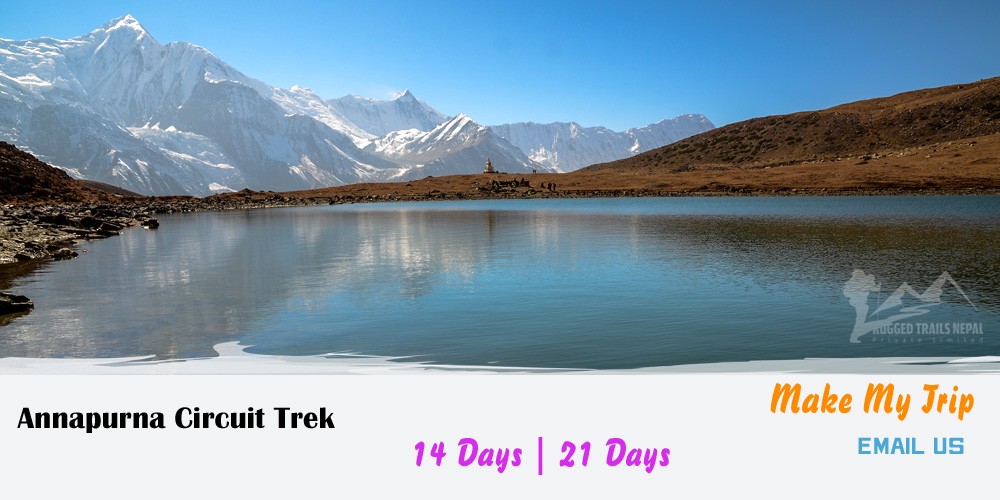 Without any doubt, Upper Mustang Trek is among the top trek trails in Nepal. Our country is widely known for the high alpine trekking, which is why the Upper Mustang trail is so notable. Yes, you still get the views of towering peaks and rugged ridges, but this path gives you much more than that. The ethnic groups and landscape of the Upper Mustang region cannot be found anywhere else. To this day, many locals carry out a traditional way of life, including the way in which they practice Tibetan Buddhism.

Note If you are not interested in trek then Mustang can be done with the Jeep Drive within a week. Upper Mustang trek permit is expensive (500$ a week) so if you want to see lower Mustang that could be another option. 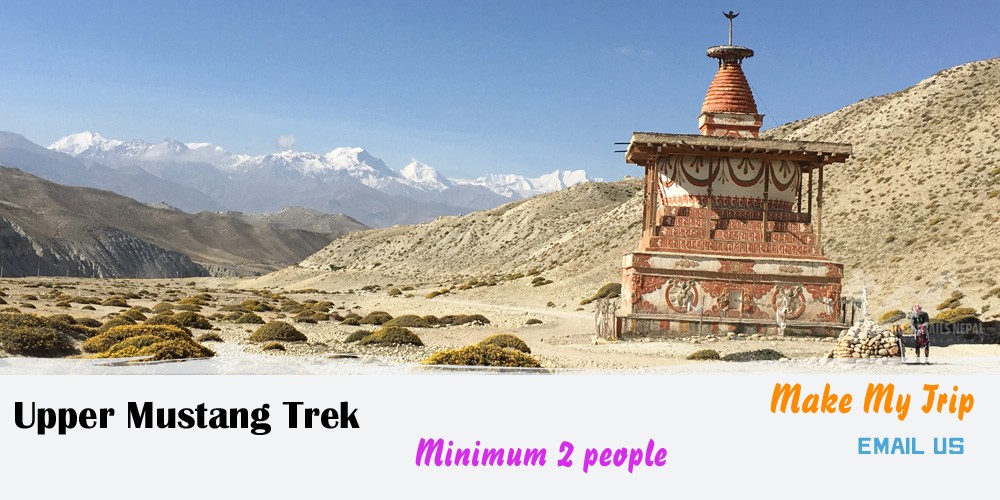 Manaslu Circuit Trek joins the Annapurna region with the Manaslu region, and you truly get the best of both. Many guides say the trail is comparable to the Annapurna Circuit Trek, but with fewer tourists. The amazing scenery never stops. From the forests, teeming with life, at the beginning of the trail, to the barren, rocky landscape above the clouds, you will constantly be in awe. Free your mind for a bit on the Manaslu Circuit Trek.  Your biggest worry will be ‘where is the next best view?’

Note: If you want to add Tsum Valley while doing  Manaslu Circuit is another option or you can add Annapurna Circuit together but will be a longer trip. 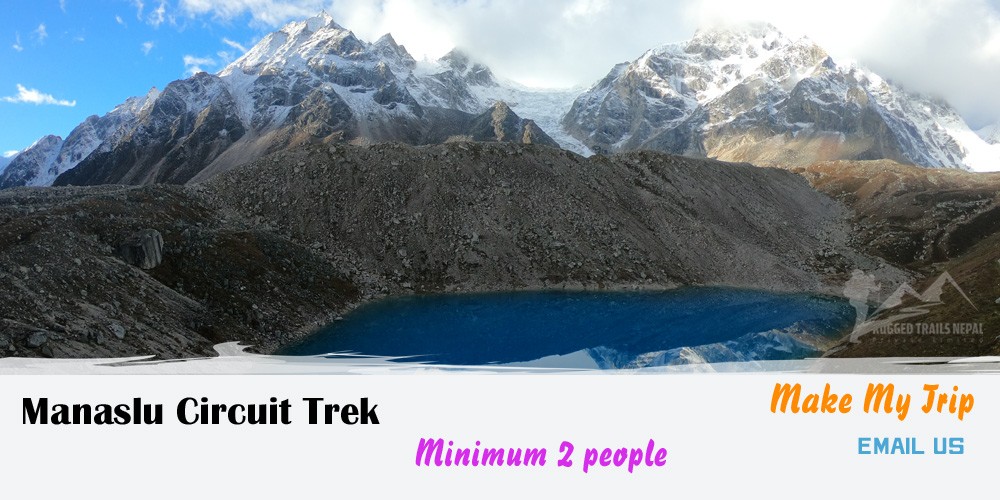 Combined with the Langtang Valley Trekking, the trek to Langtang Gosaikunda trek begins from Syabrubesi and heads along the ridge of the Langtang Khola River. Crossing the ethnic villages like Lama Hotel and Chyamki, it enters into the Langtang valley, which is described as one of the beautiful valleys in the world.

Note If you want to skip Gosankunda then only Langtang Valley Trek will be another option. Another simple 5 days Gosainkunda Lake trek could be the best option. 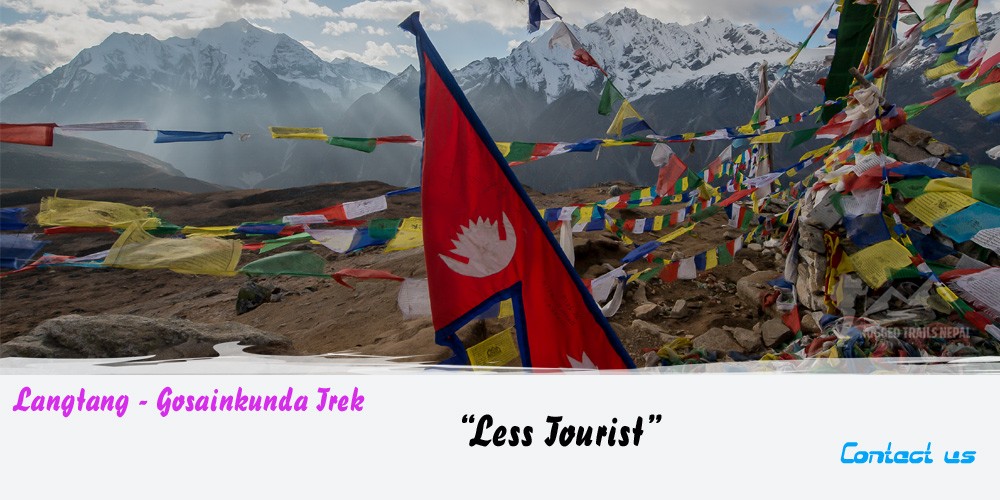 The Rara Lake is the centerpiece of the Rara National Park, lies at an altitude of 2,990m (9,810ft) above sea level and also an ideal location for the bird watcher. Nepal's largest lake, Rara Lake is 5km long and 3km wide, its maximum depth at 167km. RARA LAKE IS A SHIMMERING BLUE JEWEL SET IN A RING OF SNOWY PEAKS
BILL GREER (GORP FOUNDER)

Note Just to see the Rara Lake doesn't need to think about hike and gears. Simply fly and drive up to Rara is another best option. 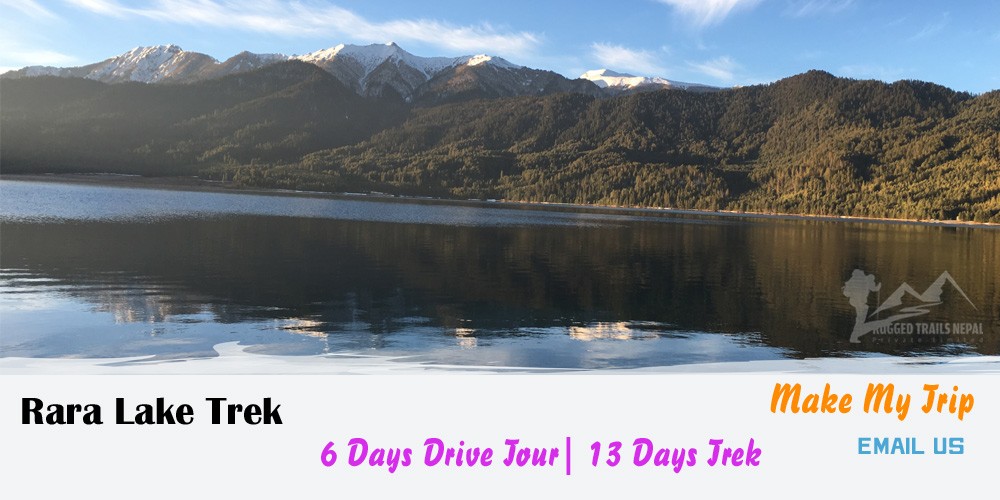 The less touristic Rolwaling Trekking is the home of Everest Climbers and the off the beaten trails below the Everest region. This region is rich in the oldest Monasteries, Rivers, Waterfall, Glaciers Lakes, and the Mountain Peak.

Note  A simple Rolwaling non-touristic trek can be a good choice for those who are looking for short but not a commercial trek. Write to us! 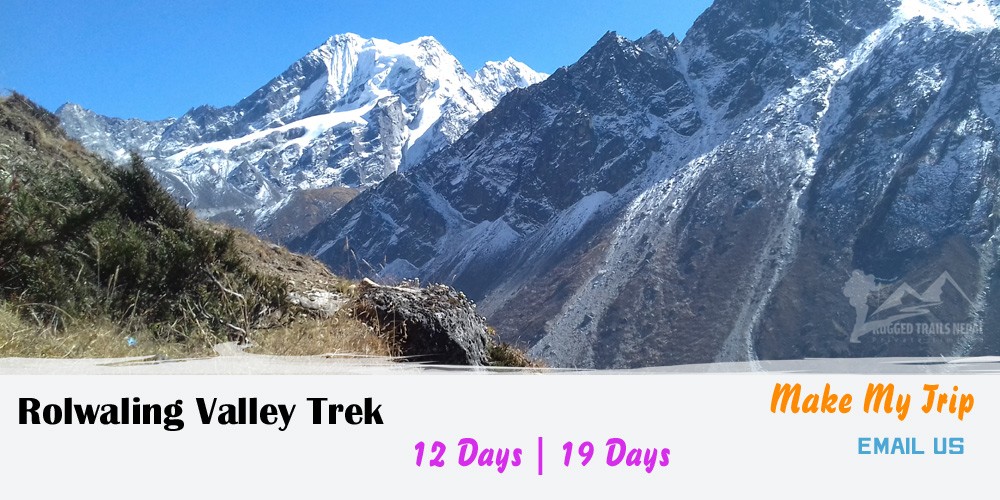 Annapurna base camp trek is surrounded by Himalayan ranges that include Annapurna, Dhaulagiri, and Machhapurchre this region also is famous for the Kali Gandi River which is known as as as to be the worlds deepest gorge and is famous for rafting. About 2/3rd of the tourist in Nepal put their first choice of Annapurna region which is easily accessible.

Note None of the other treks can replace Annapurna Base Camp but now we can add Mardi Himal Trek.

Above listed treks are all-time famous treks for the first time travelers and also for some return hiker. There are some trekking routes that were recently opened and already getting famous and trekkers' favorite choice. We are adding some trekking routes upon our clients and Guides choices because they think the below-listed treks will be the best so far in the future. 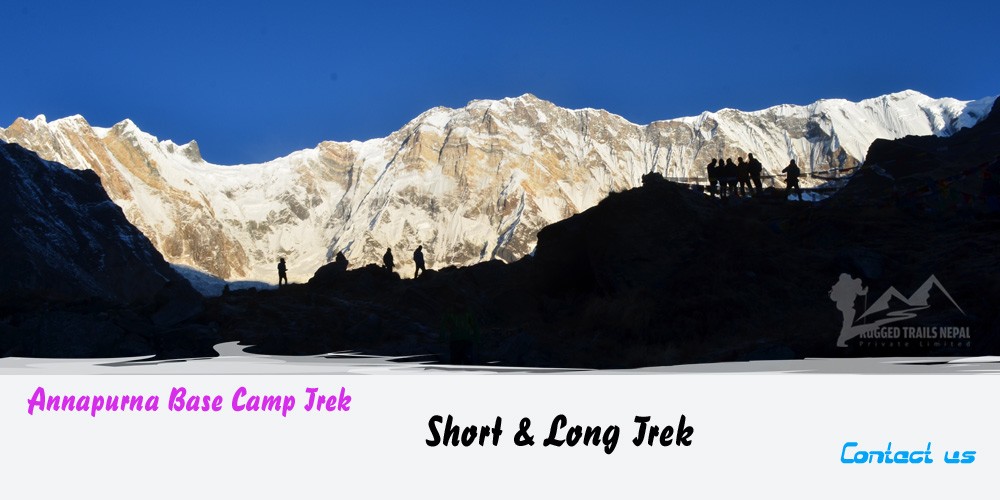 Khopra Ridge trek has all the important elements of a classic trekking route like encountering wildlife, excursing to ethnic villages, panoramic mountain views, and more. With an off-the-beaten-paths trail across the Annapurna region, Khopra Ridge trek offers a remarkable view of the Himalayan peaks such as Nilgiri, Dhaulagiri, and Annapurna South and more. If you are in search of an outstanding week-long trek with great views, the Khopra Ridge trek is an excellent choice.

Note Mohare Danda Trek is another alternative short trek and which is another best selling trek from Pokhara. But Khopra Danda trek is nice to combine with Ghorepani Poonhill. 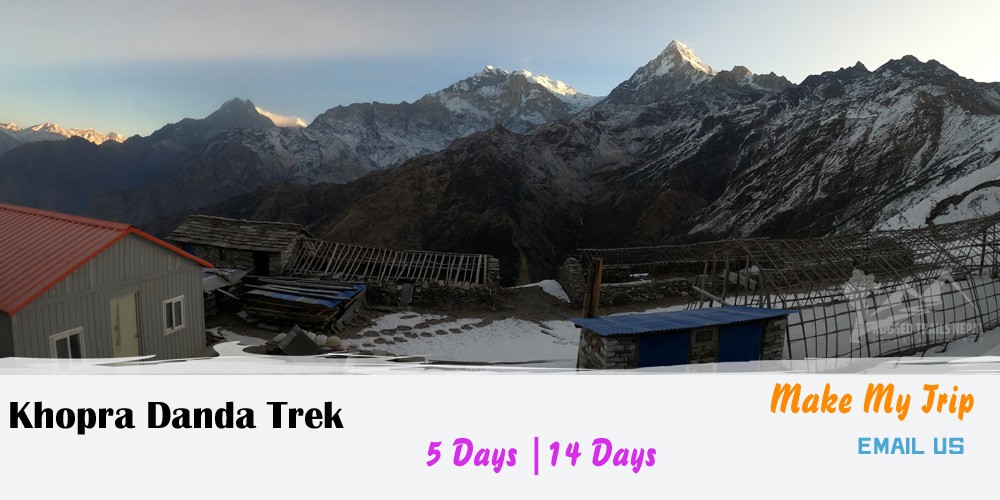 Few peaks are taller than the colossal Kanchenjunga (8586 meters / 28,169 feet). Like the Everest Three Passes Trek, the Kanchenjunga Base Camp Trek is not for the faint of heart. It is a marathon of a journey that requires camping for many of the nights. Enjoy each part of the trek, from the hill journey through terraced fields, up to the rugged alpine landscapes at Pang Pema. Set up camp above the clouds, on the middle-of-nowhere sandy flat. If the sky is clear, Kanchenjunga appears with its rugged ridges and snowy peak.

Note Kanchenjunga trek from Nepal side can be done as a mixed trek with some small lodges and homestay to skip Tented Camping Trek. Still, we need to carry a small tent but nothing is impossible BUT need to be mentally prepared.