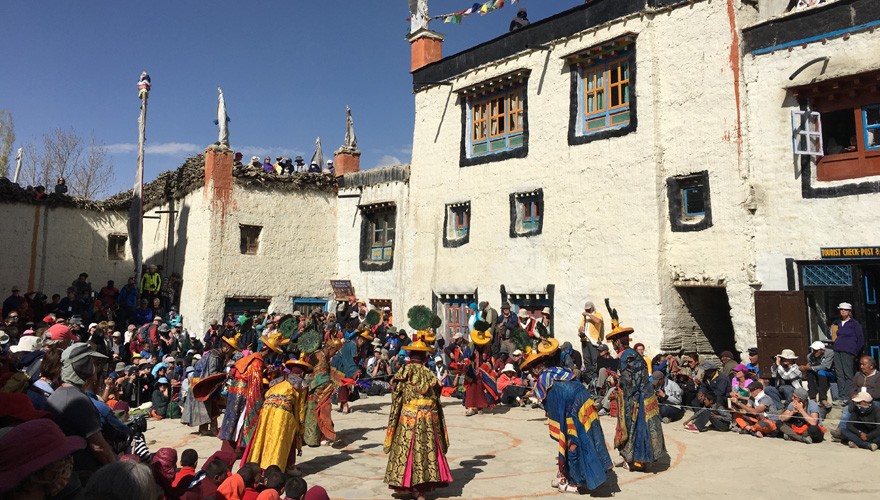 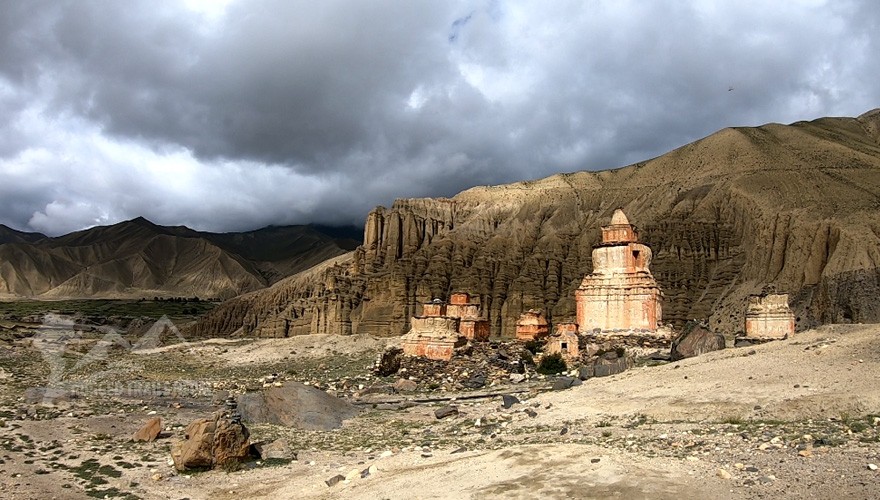 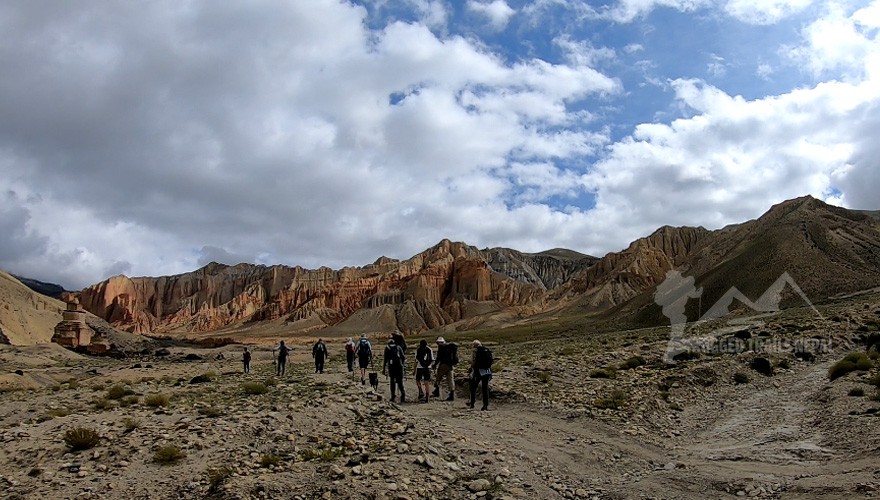 Discover the forbidden kingdom of Mustang with a spiritual twist on the Upper Mustang Adventure Yoga Trek. The trail is unlike all others in Nepal – a society seemingly untouched by modernization and landscapes that resemble Mars more than our own planet. Along your journey, you find descendants of royalty from ancient kingdoms walking the walled cities, remains of the long-dead resting in peace in sky-caves, and barely cut roads winding through mountains that nearly touch the clouds. All the while, practice yoga amidst one of the most well-preserved ancient sites in the world. Learn about the local Tibetan-influenced culture of the Mustang region while cultivating inner peace and a deeper understanding of yourself.

The region, defined as much by its 13,000-foot passes, striated rock formations, and colorful stupas as by its almost unfathomable remoteness, was, until 2011, accessible only by foot, horseback, or private aircraft. The area was not opened to tourists until 1992 and it wasn’t until 2008 that the district of Mustang became fully incorporated as Nepal. Still today, the area holds its quality of mystique, alluring adventurers and spiritual seekers from all over the world.

You’ll start the trip by exploring the medieval temples and bustling markets of Nepal’s capital city, Kathmandu. Then, travel to the chilled-out lakeside city of Pokhara, picturesquely located at the foot of the Himalayas. Take a walk on Pokhara’s lakeside while admiring the shimmering snow-capped peaks of Machhapuchhre and more. After a day of relaxation and preparation, begin your trek into the mysterious, barren Mustang territory.

Take a scenic flight to Jomsom, nestled within the Kali Gandaki River Valley, the deepest valley in the world. We hike up and onward, through the arid landscape which, in the monsoon season, becomes a green oasis. Rare alpine flowers and bright rhododendrons are contrasted against the neutral colors of the valley walls.

A major highlight of the trek is reaching Lo-Manthang, which appears suddenly in this open no-man’s-land. An extra day is spent here in Upper Mustang’s capital in order to fully embrace the cultural and natural wonder that it offers. Behind the brick wall that encompasses the city, 6,000 Lopa’s (natives of the area) live in peace, paying homage to the Buddhist stupas, mani walls, and chhortens. After a day and a half of exciting exploration and peaceful yoga practice, we descend back to Jomsom and take a flight back to Pokhara.

The Upper Mustang Yoga Trek goes above and beyond the standard Upper Mustang Trek by incorporating the spiritual practice of yoga (an intangible UNESCO cultural heritage). Imagine spending each day disconnected from your devices and fully present, in tune with the energy of the Himalaya. Breathing in, feel the warm breeze coming in through the Kali Gandaki River Gorge.

Start each day with meditation, pranayama, and asana practice before your nutritious, natural breakfast. Beginning each day like this makes you more perceptive of your surroundings and your own thoughts and feelings. There is a special energy in the Upper Mustang region and you will definitely experience it. When we arrive at the tea house each day, we take a rest and then again freshen our bodies and minds by flowing through asana practice. Not only does yoga purify our minds/egos, but it also loosens our bodies, making it safer and easier to trek the following day. After dinner, you have the chance to join a guided meditation to reflect on the day and get a good night’s rest.

Our licensed trekking guides are well experienced in the Mustang region. They are knowledgeable in first aid and are always up to date on the latest environmental conditions. Beyond that, they are fun, friendly, and share your same excitement for being in the Himalayas. Our certified yoga instructors lead you each day through your yoga practice, enriching your experience on the Upper Mustang Adventure Yoga Trek. Make your body and mind feel fulfilled on this once in a lifetime two-week journey!

Alert: We have found many local tour operators from Nepal copying our trip content, we have put case files for some companies and if we find again we are ready to mess with you guys!

The retreat starts Oct 4 with a welcome dinner.

Retreat ends after breakfast on Oct 21

Flights:  There are myriad different ways to look for a flight. www.skyscanner.com

Just bring an ATM card for cash and use it as needed in Kathmandu, Pokhara. Bring USD with you on the plane as you will need for your Visa. You are welcome to bring Travelers Cheques. ATMs are fine in Kathmandu, Pokhara and major cities but it doesn't hurt to inform your banks before coming to Nepal (sometimes banks might block your card).

4 passport photos bring Cash for Visa Fee  Visa fees are payable in USD. Money-changing and ATM services are available at the airport, but credit card payment is not a reliable option. Tourists may stay no more than 150 days in any given calendar year.