The biggest street celebration in Kathmandu Nepal is Indra Jatra, referred to as Yenya. It lasts for eight days during the Nepali Bhadra month (August to September on the solar calendar). Nepalese (especilly the Newar communities) celebrate the Indra Jatra celebration after Gai Jatra in order to thank Indra and Dagini for a healthy crop and to remember those who have passed away in the previous year. The flagpole constructed in Kathmandu Durbar Square will be burnt down on the final day, signaling the conclusion of the Indra Jatra festival. If you want to visit Nepal during Indra Jatra Festival let us know.

When is Indra Jatra Festival Celebration?

Legend has it that Indra, the rain deity, once traveled to the Kathmandu valley to steal a particular flower for his mother, Dagini. Since no one knew who he was, Indra was held captive like a regular robber. In Kathmandu's alleyways and lanes, the elephant looked for his master in vain. Concerned, Indra's mother descended to earth. The kidnapper was willing to release Indra after being exposed to the general public. Dagini agreed to perform two tasks in exchange. One is to return people who have passed away in the previous year to paradise. The second is to spread out enough dew over the course of the winter to guarantee a decent crop. Indra Jatra is observed in Kathmandu, Nepal, for this reason.

In reality, the Yenya Festival is divided into two parts: the Indra Jatra and the Kumari Jatra. The flagpole ceremony, blood sacrifices, displays of Bhairava's masks, etc. are all part of the Indra Jatra festivities. The live goddess will ride in the chariot through the streets of Kathmandu during the Kumari Jatra. Additionally, Nepalese do the customary masked dances.

People would organize a somber ceremony to construct a flagpole at the start of Yenya. The ten-meter-long pole was ultimately installed outside Kathmandu's Hanuman Dhoka after careful selection. A lavish dance event will be held concurrently. Through such beautiful dances, a number of stories about Indra and the captured moments will be performed. Buffaloes, goats, chickens, fish, nuts, and other animals are offered as sacrifices to the gods and goddesses in the Kathmandu Valley's numerous temples. Those offerings will be given to the masses following the conclusion of the Indra ceremonies.

Masks of Bhairava on display

People would open the screened door of white Bhairava after setting up the ceremonial pole at Hanuman Dhoka. He will be exposed in front of Kumari's chariot parade with his hideous visage on display. Only once a year, this great display lasts for three days. The massive crystal on the masks must astound you. Along with the official exhibitions of Bhairava in Durbar Square, Kathmandu's streets and alleyways are also crowded with Bhairava masks produced by the locals. It denotes that God Bhairava will always be watching over Goddess Kumari no matter where she goes.

Kumari, the living goddess, had to halt and meet the white Bhairava mask. After paying homage to Bhairava, music may be heard throughout the Kathmandu Valley. As a result, beer begins to flow out Bharirava's mouth. Nepalese people think that drinking this beer will bring them good luck. In addition, a little goldfish would be placed in the beer ahead of time. The person who catches the fish must be the luckiest, since it will bring him good fortune for the entire year.

Kumari's chariot procession is one of the most prominent Yenya Festival activities. Three golden temple chariots are erected outside the Kumari Temple one day before the major parade. The entire procession lasts three days. People dress up in colorful costumes and congregate in Durbar Square to await the arrival of the living goddess.

Nepalese officials and diplomatic personnel assemble at Gaddhi Baithak in front of Durbar Square to see the magnificent military display before the entrance of the living goddess Kumari. Kumari's chariot procession follows the ceremonial parade. At the start, two boys emerge from Kumari's house, representing the human representations of the deities Ganesh and Bhairava.

They will then be transported individually in the chariots as the goddess' attendants. Finally, the entourage transports the live Kumari to the final chariot so that her feet do not touch the earth. Some attendants ride in the chariots to guard the deities and throw flowers among the joyful people. As a result, each chariot will be drawn ahead by more than ten people. The lovely chariots go gently away, as the president pays tribute to Kumari's goddess on the balcony of the old palace. The procession then proceeds from Durbar Square to Hanuman Dhoka, where the live goddess welcomes the figure of Bhairava. People will act out the myth of Indra while Kumari marches across Kathmandu. 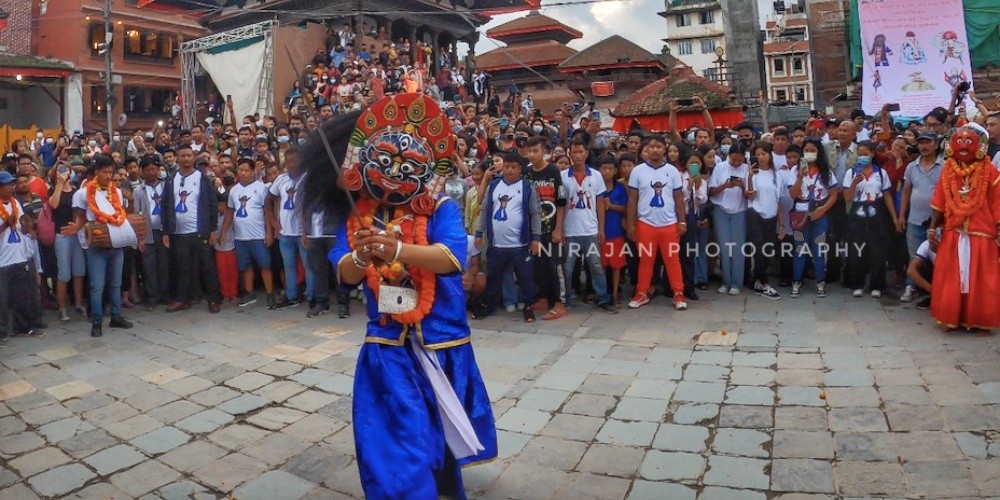 Mata Biye translates to "butter lights." The family gathers on the first day of Kumari Jatra to present butter lamps to their deceased relatives. The procession begins at 18:00 p.m., and people march all the way through the historic Kathmandu city to honor their loved ones.

Indra Jatra is one of Nepal's most popular celebrations. The Kathmandu Durbar Square will be open to all tourists on this day. It's also a perfect opportunity for you to get a beautiful photo of the living goddess Kumari. The grandiose festivities and chariot procession are reason enough to visit. Please contact us if you want to follow your own Nepal tour.

After the event is over, the large pole is carried in procession to the Bagmati River, plunged, and then broken into pieces to fuel the enduring light at a different Bhairab temple on the side of the river. So much for the living; for them, the Indra and Kumari jatras are carnivals with many attractions, including dances portraying the demons Lakhe and Dagini, representations of the mortal manifestations of Vishnu, folk dramas, processions of masked 'deities,' a dancing elephant made of bamboo, painted cloth, and human legs, and the massive trundle of the Kumari's rath, which is followed by smaller chariots