Festivals And Celebrations In Kathmandu in 2023

Nepal is considered to be a colorful country full of life, full of diversity. Nepal is the home for 123 ethnic groups and every people speaking a different language. Divided into 4 castes and 36 subcastes Nepal has unity in diversity. Kathmandu the capital city of Nepal is full of peoples of every cast every language and every tradition. Most of the Nepalese people are found to be Hindu and Buddhist but Nepal has an amount of Muslims, Christians, and Sikhs and they all have respect and religious tolerance for each other. The birthplace of Siddhartha Gautam Buddha is as peaceful as himself. Nepalese are full of life which can be seen by the festivals celebrated by them. According to their religious belief and diversity, different kinds of festivals are celebrated in Nepal and some of them are as below:

We have listed some of the major Festivals and Celebrations in Kathmandu but there are many other festivals that are celebrated in Kathmandu such as Teej, Indra Jatra, and many more... 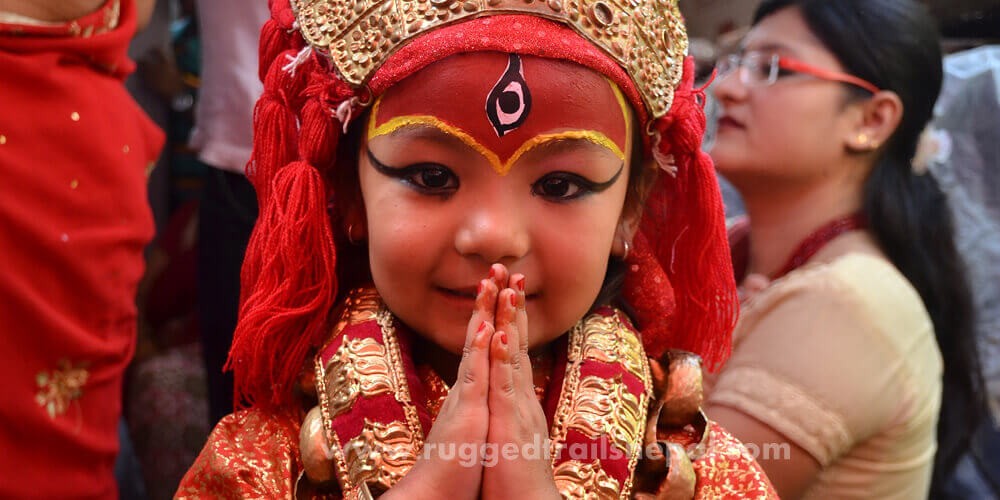 Festivals And Celebrations In Kathmandu in 2023

Holi is the festival of colors and also the significance of the victory of good against evil. it is celebrated in Fagupurnima which is at the time of  February march every year. It is a festival mainly celebrated by the Hindus as a day celebrated for the death of evil asur Holika. People share sweets and love with each other and put colors and water to each other and enjoy it. Lots of people also prefer to drink bhang lassi during this festival. It is celebrated for two days. This festival not only brings color for a day it gives hope for people to do good, joy in their faces, and love among each other.

Vijaya Dashami is considered to be the biggest festival of Nepalese people although it is a festival of Hindu it is enjoyed by every people. the translation of Vijaya Dashami outcomes to be victory and ten days that is from the Hindu mythical belief goddess Durga purified the world from the evil by killing them in those ten days and that’s why it is celebrated for ten days at the time of October November annually. It is also called Dashain. The first day is Ghatasthapana when people put mixed grains in the soil to grow Jamara. And the days pass performing different rituals each day the eighth-day people make swings to play and hunt down goats as Bali to goddess Durga and on the last day people put on tika and blessings from the elder ones and Dashain is ended. During this festival people clean their surroundings, eat good food and wear new clothes. This festival brings joy and happiness in every face and lets them drown in joy.

Tihar is one of the biggest festivals of the Hindu community. This is the festival about brother and sister and their love. This festival comes just in a short period after Dashain ends. It is celebrated for five days, each day celebrating and respecting different things and animals. First-day Kaag (Crow) Tihar when the birds crow known as a messenger for humans is worshipped, then the Kukur (Dog)  Tihar, a dog who guards our houses are worshipped. Then Laxmi puja and Gai puja, goddess of wealth Laxmi and cow are worshipped, in this day girls play Bhaili singing and dancing in traditional costumes. Also, the houses are decorated and lighted up with lights and candles to win over darkness. Next is Govardhan puja, the ox who is crucial for farmers and is a sign of Lord Shiva is worshipped and likewise, the boys sing deusi songs. The last day is Bhai Tika, sisters put seven-colored tika to their brothers and give good food, and put on malas made of Makhamali flower in the belief that lord of death Yamaraj will extend their brother's life along. In exchange, brothers gift their sister's beautiful dresses money, and other things they want. overall this festival brings to light in the dark and respect to the animals too.

This auspicious occasion is celebrated all over the country but especially in the southeastern part of Nepal. It is amazingly celebrated in Terai and inner Terai mainly by women. It is celebrated for three days and in November. The sun is worshipped in this festival praying it to keep them away from diseases. The first day includes cleaning the environment. The second day is for collecting various fruits, food, and nuts. People gather around the bank of the river at the end of the day and light up oil lamps and let them float in the water which is the best thing to witness at that time. And the last day they worship the sun and pray for a disease-free life.

Gaijatra is one of the beautiful festivals celebrated for a beautiful reason. This amazing festival is mainly celebrated by the Newar community. The day to celebrate is set according to the Lunar Nepal Era which falls in August or September. According to Hindu myth When King Pratap Malla lost his son the queen got stuck in the grief of his death then the king decided to bring out a rally of people who have lost someone once in a life. There was almost every family, this helped the queen and king to diminish the grief and move on. That day onward they decided to dedicate a day of a year in the memory and respect of the dead ones and the holy animal cow which helped them in the way of heaven were brought out. in this way, this festival was started to celebrate and people as that day come out for a rally with cows and the other things reflecting dead ones. This festival brings out hope for people to overcome their grief and accept the rule of nature. 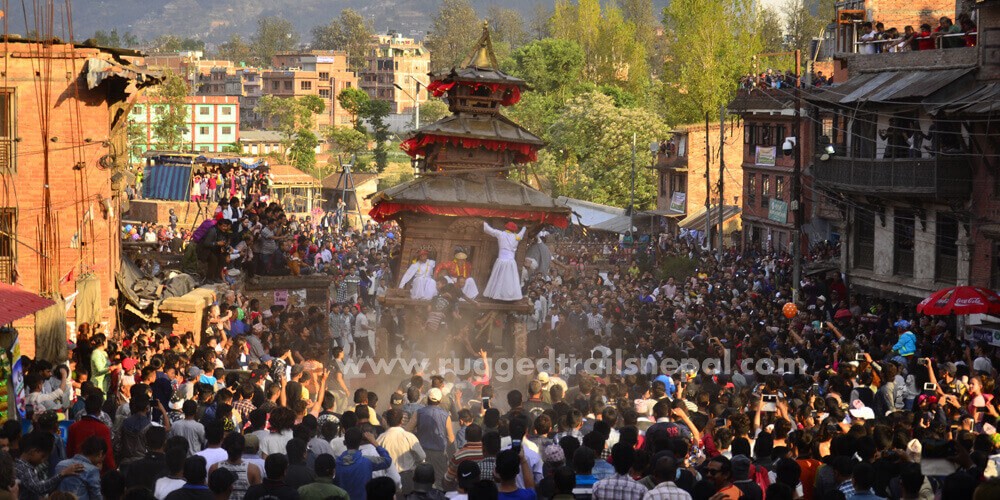 Shivaratri is also the biggest festival celebrated by Hindus of Nepal. It is the festival to worship Lord Shiva and Shakti and their greatness. This festival is celebrated on the 18th of Feb 2023.  it is a myth that the stars of the northern hemisphere which raise a person’s spiritual energy are in the optimum distance and it is also believed that Lord Shiva performed the Tandava cosmic dance on that day. The main center for this celebration is Shree Pashupatinath who is also considered the guardian of Kathmandu. The pilgrims from different places gather and chant songs of Shiva like om Nama Shivaya or the chant called mahamrityunjya Jaap. People sit all-around a bonfire and stay awake the whole night filled with the love of Shiva. Learn More about the Shivaratri Festival in Nepal

It is the centerpiece of festivals. it is the  Jatra of Golden Chariot. This festival is celebrated in mid-April, the last day of the Nepali year calendar. A golden chariot is pulled over streets until it reaches Khalna tole. When it reaches there a pole about 25m is held up high and is demolished the next day as a symbol of ending the day and turning it into a new year. This public occasion is assisted by locals by putting tika to their young ones and this way the new year is brought out to life. 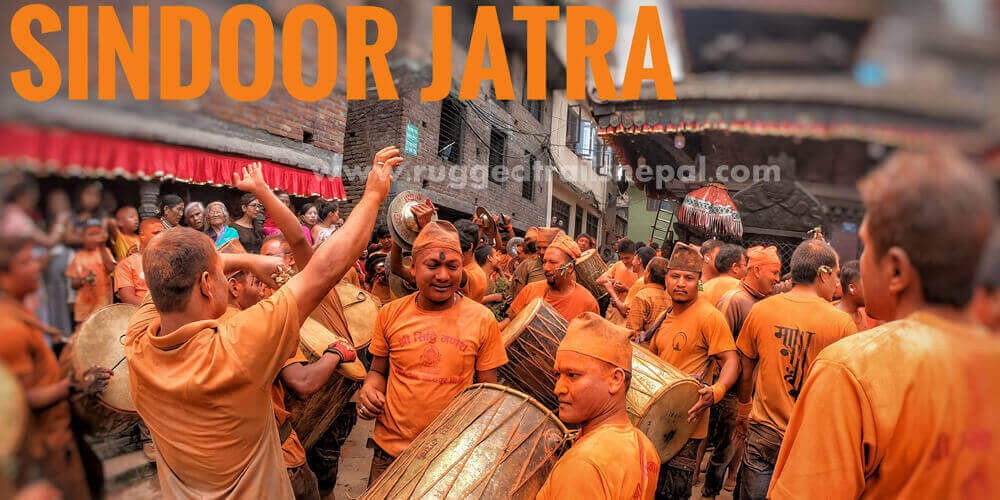 Women in Nepal celebrate Hartalika Teej as a celebration of their husbands' long lives and their committed marriage, which will last until their deaths and those of all future generations. Teej is followed to promote marital harmony, the health of one's partner and children, as well as to purify one's own body and spirit. The most well-known event among Nepali women is Teej. The folklore and dances give Teej's traditional values a richer flavor. It is amazing to witness ladies coming to the temple in a fasting and holy spirit while dressed in "Red" and dancing and singing in public. Hari Talika Teej is another name for Teej. Hindu ladies from Nepal commemorate this event all over the world.