You have been hearing of Everest Base Camp, Annapurna Region, Pokhara but might not have heard about Far West Tourism in Nepal. Far West is an untouched and unexplored destination in Nepal and the most potential attractions off the beaten trails. Far West includes the flat land, Himalayas, mountain, Lakes, National Parks with the highest elevation at 7,132 meters.

Welcome to the Far West of Nepal! Few tourists brave these wild western corners of the country. It is perhaps Nepal’s best-kept secret – a land home to kindhearted people who live on some of the most unique landscapes on our planet. But there is a vast amount of land that lies even further west that is seldom explored by tourists. It is a sanctuary of pristine landscapes and unique ethnic groups. Don’t hesitate, come before the crowds find out about it!

The enticement goes beyond that this area is widely void of tourism, though that is a defining trait. The massive mountains, alpine meadows, immaculate lakes, and fertile lowlands are nearly entirely unspoiled. With off-the-beaten-path trekking as its specialty, Far West Nepal gives you a true taste of wilderness, with distinct cultures that are purely intact.
One of these precious destinations lies in Rara National Park. The Rara Lake Trek gives hikers seeking isolation exactly what they want. The trail leads through remote villages and lush forests up to the hidden lake. In fact, besides government workers, nobody is legally allowed to live around the lake. Walk along the shore of the crystal-clear lake with soaring Himalayan peaks as the backdrop. 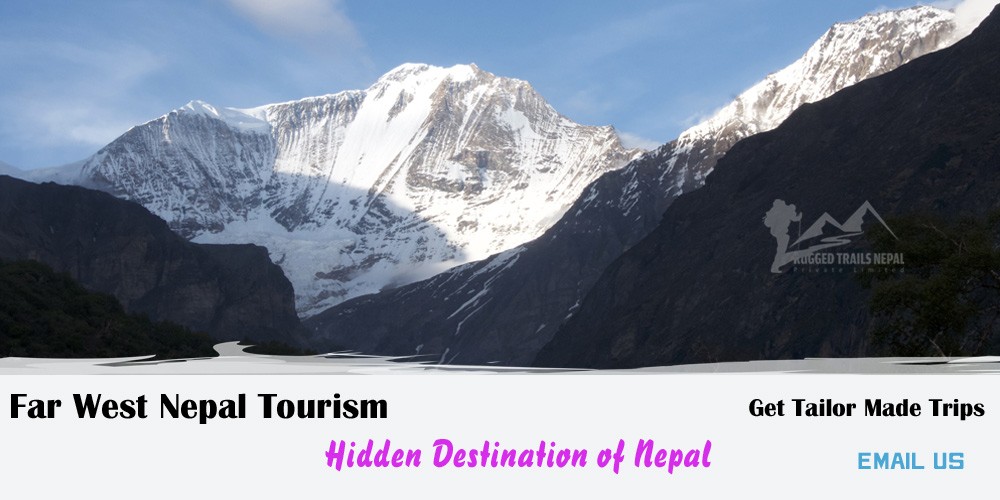 Or, delve into the mysterious Dolpo district for an out of this world adventure. Until semi-recently, no foreigners were even allowed into the district. Since then, there have been books and movies made about this magical place. There are several routes through Dolpo, including Upper Dolpo and Lower Dolpo Treks. A highlight is reaching Shey Phoksundo Lake, widely agreed as Nepal’s most beautiful lake. Its turquoise waters are surrounded by steep rock walls, the contrast of color is stunning. You have to see it believe it!

Much of western Nepal had been part of an ancient Tibetan kingdom for hundreds of years. Ethnically, the area is much different than Kathmandu or the rest of Nepal for that matter. Some of these groups are exclusive to the Far West and you will be fascinated to learn about their day to day lifestyle. Trekking in Nepal always comes with the beauty of learning about the various cultures, but the distinct groups add to the allure of Far West Nepal. Most of the mountain trails in Far West lies within the rain shadow of Dhaulagiri and other peaks. So, come to western Nepal at any time of the year! Even the monsoon provides for an amazing time.

Far West is the least accessible area of Nepal, but do not let that deter you! Getting there is part of the adventure – and a small price to pay for such a marvelous adventure. More many of the places, including the Dolpo treks, it is required to have a guide. We would love to share this wonderful part of the world with you! Let us know if you have any questions about traveling in Far West Nepal.